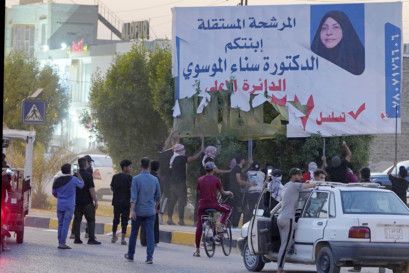 BAGHDAD: Members of a paramilitary organization integrated into the regular Iraqi security forces lamented on Sunday an official decision preventing them from voting in the same way as other security personnel.

Security forces personnel will vote in the country’s parliamentary elections on October 8 in the places where they are stationed, two days before the main ballot, in which citizens will vote in their home constituencies.

A statement released by the electoral commission on Saturday sought to explain why members of the Hashed Al Shaabi – a militarily and politically powerful network of 160,000 people – will have to vote in the main ballot on October 10.

He said he contacted Hashed officials on several occasions to request lists of fighters to be included in the special vote.

Voting in home regions could prove difficult for many staff stationed in geographically remote locations.

A spokesperson for a key Hashed group, Kataeb Hezbollah, said on Saturday evening that the measure “deprived fighters of their right to choose who would represent them and protect them from those who seek to weaken them.”

Ahmed Assadi, a Hashed lawmaker complained that “our brothers from Hashed Al Shaabi have been deprived of their special voting rights – they will only be able to vote if they leave their offices and return to their (home) regions “, in a statement published Sunday on social networks.

The legislator called on his supporters to move in droves “to compensate for the (lost) votes of our heroes who defend their positions”.

The Hashed, which includes dozens of mainly pro-Iranian Shiite groups, was created in 2014 to fight the Islamic State group, as the regular army failed to stem a meteoric advance that allowed the jihadists to break out. take over a third of the country.

The main Hashed coalition has 48 legislators among the 329 parliamentary seats.

They entered parliament for the first time in the 2018 vote, having contributed immensely to the defeat of ISIS.

Opposition activists accuse Hashed armed groups of being beholden to Iran and of being an instrument of oppression against critics.

Along with security force personnel, prisoners and displaced people will also vote in the special exercise on October 8.

More than 25 million citizens are eligible to vote in total in this month’s poll, brought forward a year to quell a protest movement that started two years ago but then shrank.