Two pieces in The story behind the sheets exhibition by Michel Mirabal. // Photo by Hannah Scott

The Kansas City Museum’s new exhibit is titled The story behind the sheets and tells the stories of the lives and experiences of individual Cubans through the lens of Cuban artist Michel Mirabal.

The museum does not want to be defined by a certain niche. Instead of believing that a history museum can only share artifacts, they decided to let others learn through art, music, and historical artifacts.

“I’ve found that in museums sometimes we make such a strong distinction between this is an art museum and this is a history museum and you have to stay in your lane,” says Anna Marie Tutera, executive director of the Kansas City Museum. “But this museum is different because we take an interdisciplinary approach to learning about history and culture. We want artists and artistic expression to create another layer of learning.

The museum linked to Cubanisms: A Cuban Cultural Project to create the exhibition. The group not only works to connect Cuban and American culture in the states, but also sends individuals on trips to Cuba to help them better understand the country and its people.

Mirabal and Cubanisms Founder Dalida T. Pupo Barribas wants people to know that there is so much more to the culture of Cuba and its people than its government.

“One of the main questions from clients we work with on our trips to Cuba is often, will we be welcome there?” said Barribas. “But they always find out and if you ever go there you’ll say this, if you go there and say you’re from the United States, people always go ‘Wow! We’re so glad you’re here. We have family, friends, neighbors, so many people we know who live in the United States, and our culture is so tied to the United States in so many ways. 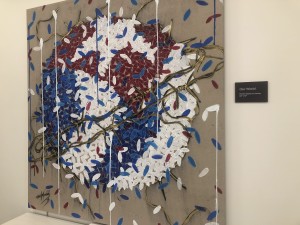 A play by Mirabal entitled “Our World”. // Photo by Hannah Scott

The story behind the sheets tells the stories of families and individuals in Cuba and the honesty of their way of life. Mirabal explained that the title is inspired by sheets hanging from apartment balconies to dry, and behind these sheets hides a life that so many people don’t understand.

“I was born in a place that looks like a project, and everyone always had sheets in front of their house because we didn’t have a lot of room for dryers,” says Mirabal. “For me, behind the sheets means you can see all the stories that are happening inside the perimeter of these apartments. You can see smiles, hear music, smell different things, and taste different flavors, but I took all of these ideas and tried to paint them.

Mirabal was born in Cuba but has worked around the world and is internationally recognized. Cuba is one of the few places not to host one of his galleries, but he still works to support the community by donating money to different organizations and visiting neighborhoods and schools.

Although he has created works for individuals like Barack Obama, Mirabal tries to keep his feet on the ground to move forward.

“I can’t see myself as a famous guy,” Mirabal says. “I see myself as the same guy from the beaches. I don’t necessarily know what I’m going to do next but I just know that I only want to do art. I always say art is everything, art is life. So if I work and create in the future, I expect the future to be good.

The story behind the sheets is a free exhibition until September 25. To know more about the exhibition, you can find information here.