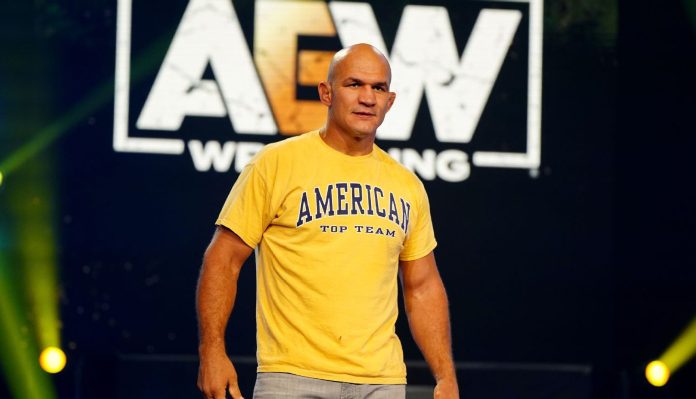 Junior Dos Santos is moving from the octagon to the ring – at least for now.

Dos Santos, 37, is the former UFC heavyweight world champion. To win the title in 2011, he scored a quick 64-second knockout against Cain Velasquez. Ten years later and just like his rival, “Cigano” followed in Velasquez’s footsteps by trying his hand at professional wrestling.

Over the past few months, American Top Team owner Dan Lambert, along with several MMA fighters training outside the gym, has taken over All Elite Wrestling: Dynamite on Wednesday nights – Junior Dos Santos included.

In this latest episode, Lambert announced that next week in Miami on Friday Night AEW: Rampage, there will be a six-man tag team match between AEW’s Inner Circle and Ethan Page, Scorpio Sky and the first Dos Santos.

UFC’s top welterweight contender Jorge Masvidal will also make his presence felt by accompanying the “JDS” team into the ring where they will stand outside the ring. This will not be the first appearance of “Gamebred” in AEW.

Masvidal does his Jericho thing in AEW Rampage 😭 pic.twitter.com/jUCyqfMl5h

Since then, the Brazilian has expressed interest in potentially getting into boxing and joining the Bellator roster for a dream match with Fedor Emelianenko. Unfortunately for Dos Santos and everyone else in the Emelianenko contest, Tim Johnson ended up getting the call for the Bellator’s debut in Russia on October 23.

As for Masvidal, title holder Baddest Motherf * cker is set to line up an old grudge match with Leon Edwards – while simultaneously running his own bare-handed MMA promotion, Gamebred FC.

This article first appeared on BJPENN.COM