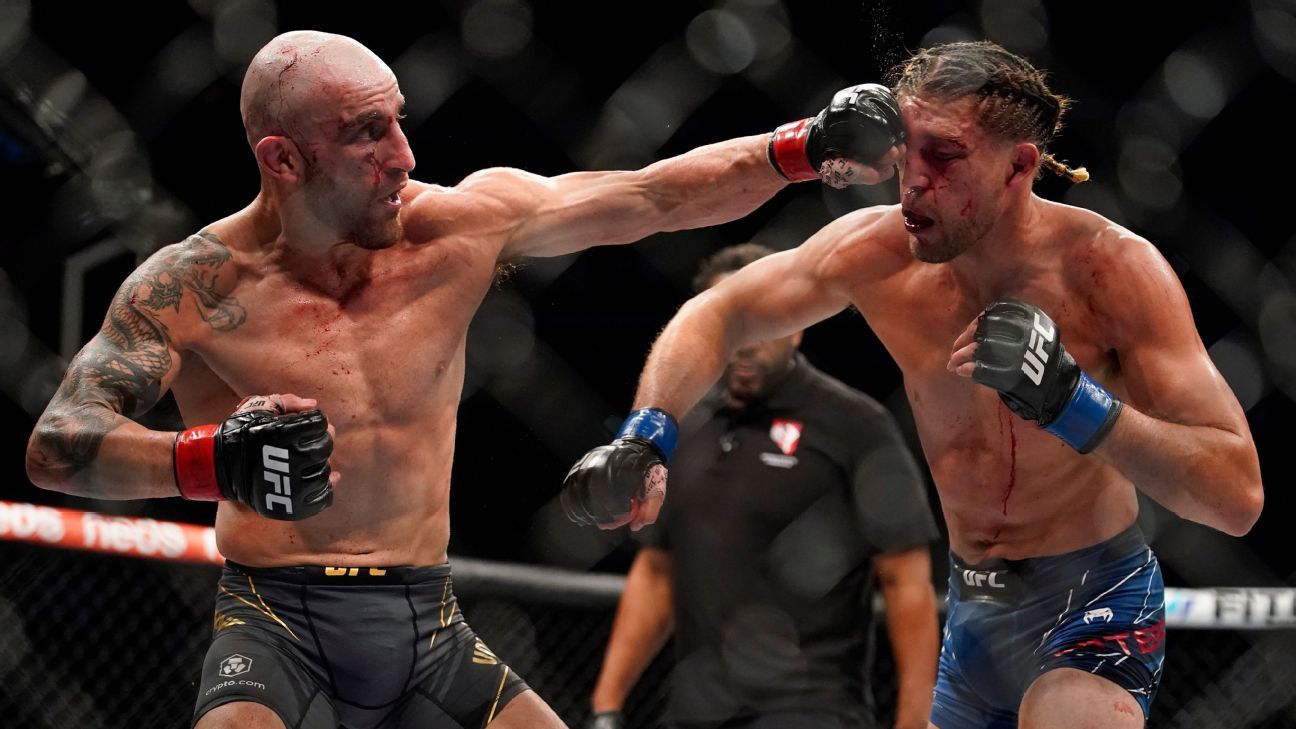 Alex Volkanovski, Brian Ortega, Valentina Shevchenko and Nick Diaz reminded us of how great real fights can be

Why can’t all fighting nights be like this? Why are we drawn into trashy melodramas when we might instead be boosting our spirits and endorphins with a fighting night like the one we just saw at UFC 266?

Saturday night had it all.

Alexander Volkanovski took on another challenge in the main event, as he has quietly been doing for years, waiting for someone to notice. The Australian’s 20th straight victory, a bloody assault from featherweight challenger Brian Ortega, was a five-round battle in which the champion had to escape twice the tight submission attempts of a fighter best known for his game of jiujitsu. Even with two victories recorded over Max Holloway, this victory should finally draw some more deserved attention to “Alexander The Great”.

Another great show in the main co-event. Valentina Shevchenko showed why she is perhaps the most dominant champion in the sport, widely outscoring flyweight challenger Lauren Murphy in a fourth round TKO. No fighter is above being defeated on any given night, but there just isn’t a 125-pounder who seems capable of hanging on with Shevchenko. And even as a favorite of -1,500 bets, she was exciting to watch – until she spoke to fans in four languages. What can’t she do?

The most star-studded attraction of the night, however, was Nick Diaz. In his six years away from fighting, we may have forgotten that he is a wizard who draws from us all the emotions we are capable of feeling. He reminded us of this by engaging in a battle with Robbie Lawler who went back in time a bit. Not when they first met 17 years ago, but surely at a time when Lawler wasn’t mired in a four-game losing streak and Diaz’s desire to fight was not in question.

Neither Diaz nor Lawler seemed to be in the prime of their lives, but this sad sight wasn’t one that some might have feared either. Lawler got the TKO in the third round after a relentless back and forth that took T-Mobile Arena to deafening heights. Hoping both men enjoyed the adulation of fans spouting from all corners of the building. They’ve always kept it real, and Saturday night was no different.

Marlon Moraes and Merab Dvalishvili show off their incredible endurance in the first round of their UFC 266 fight.

These three fights were just the culmination of an essential night for combat sports. In an era when the YouTuber trend as a boxer is shifting from the far bangs to at least a mainstream tributary, a night of real fighters doing real fights is no longer a luxury. It’s a necessary ingredient for MMA to maintain its place in the landscape – and boxing too. Earlier today, Oleksandr Usyk dethroned heavyweight champion Anthony Joshua in front of 66,000 fans in London.

But UFC 266 was a sustained feast of fighting. Ahead of the two title fights and Diaz’s return, there were clashes between heavyweight ranked fighters (Curtis Blaydes dominated Jairzinho Rozenstruik) and women’s flyweight (Jessica Andrade knocked out Cynthia Calvillo) . We also saw Merab Dvalishvili make a stunning comeback, on the verge of being knocked out by Marlon Moraes to turn the tide for a TKO win – thanks to a triple-figure barrage of unanswered strikes.

And there was still more. It was one of those nights that would have made late-night TV infomercial dealer Ron Popeil proud. It’s an old-fashioned reference, sure, but maybe it’s appropriate on a night that was sort of a throwback to when fight cards were filled with the right kind of drama. And real fights.

Robbie Lawler and Nick Diaz put on a show for the fans at UFC 266.

Diaz has shown signs of his old self, but it’s time to walk away

Raimondi: I was one of the first people in the world to watch Nick Diaz’s raw interview with Brett Okamoto earlier this week. And I’ve maintained for the last few days that I wasn’t too concerned with what Diaz was saying. We’ve known about Diaz’s mixed feelings about the sport of MMA for a decade now. Diaz never hesitated to tell us that he never liked to fight, it was just something he did out of necessity. He was born to do it, even though it was something he ultimately hated. Even after Diaz retired from his UFC 266 fight with Robbie Lawler in the third round, I don’t feel too different from what I felt before the fight.

Let’s be clear here. Diaz didn’t look slower than normal and in worse shape than normal because of everything he said in this interview. It was because he was 38 and hadn’t fought for almost seven years. Diaz brought the fight to Lawler. He landed bigger strikes – 150 to 131, according to ESPN Stats & Information – and landed the biggest strikes in a loss in a fight that ended as early as this one in the history of UFC. Diaz’s punches were slow, but he pulled off a bunch of combinations and won at least one round against Lawler.

If pay-per-view is purchased, all UFC 266: Volkanovski vs. Ortega fights will be available to watch on ESPN +.

Watch the full map on ESPN +

Diaz told Okamoto this week that he would regret not taking this chance to come back now before it’s too late. He said he wasn’t sure how he would feel about himself if he didn’t at least seize the opportunity. Well, now he’s done it. And, despite some good times against Lawler, it’s time for him to hang up the gloves for good. Outside of a few aging legends like him, I don’t know how comfortable I would be watching Diaz against someone else the UFC could field for him next. Lawler was a great match, another aging warrior whose best days are in the rearview mirror.

In the end, it was not a complete disaster, nor a resounding success. It was somewhere in the middle. I’m glad Diaz knew when to say he was done. He had this presence of mind before things started to deteriorate quickly. Hopefully he can now be at peace with his retirement without any potential regrets for his MMA career. He has given us everything enough and now it is time for him to take a step towards the rest of his life.

Diaz has given us nearly two decades of combat entertainment. He’s not one of the greatest fighters of all time. But he’s one of the most popular fighters of all time because you always knew what you were going to get: absolute war. That’s what happened against Lawler on Saturday night and Diaz knew when to wave the white flag. It’s time to do the same when it comes to his rich career.

Valentina Shevchenko looks like it’s easy against Lauren Murphy on her way to her sixth straight title defense.

Appreciate Valentina Shevchenko, even though she erased the drama in a sport that depends on it

Okamoto: For the record, I think we appreciate Shevchenko. I believe this sport is aware of how special she is. This sport gives Shevchenko his due.

But it’s not always easy, right? It’s easy to ignore it, because we as viewers want the unknown. Of course, we admire greatness, but there is only a limit of dominance that we are willing to take before our interest wanes. And right now, Shevchenko could be heading to that territory. She is demolished every flyweight she’s faced, and she’s already knocked out the best challengers available to her.

If we squinted really hard and used our imaginations, maybe we thought these challengers had a chance. The Joanna Jedrzejczyks and Jessica Andrades of the world. Shevchenko ate them. Now, just to get some more showdowns, we’re going to keep going down the 125-pound rankings. And the betting odds are going to stay very, very high in Shevchenko’s favor. And as viewers, sometimes it will be difficult to stand up.

But the way Shevchenko has perfected his craft and continues to dedicate himself and improve in a sport that demands so much – it deserves to be considered. So, keep watching Shevchenko. And continue to admire her for what she is. Even if it’s like seeing a movie you’ve seen 100 times before.

Dan Hooker takes a unanimous decision victory with an impressive performance against Nasrat Haqparast at UFC 266.

Dan Hooker Should Get A Big Name Next

Legaspi: The fight took place, which was pretty important in itself. The visas for both fighters arrived at the last moment, and we had a dominant display from Dan Hooker on Nasrat Haqparast. Neither of them asked for a catch weight – it was important for Hooker to stay light in order to prove he belongs near the top 5 in the division again.

Michael Chandler’s early knockout against the New Zealander made many people forget that Hooker was in some of the best fights of 2020. Two 25-minute wars, against Paul Felder and Dustin Poirier, brought Hooker to talks for the title, and it should stay there after what we saw on Saturday. He had less than 72 hours to fly from Auckland to Las Vegas, gain weight and beat Haqparast. He was excellent on the feet and put in a decent performance on the floor with his much improved wrestling.

It might be a good time for him and some of his City Kickboxing teammates, like middleweight champion Israel Adesanya, to make a short-term decision to spend more time in the United States, as quarantine protocols and Embassy closures will continue to complicate lockdown efforts. down big fights in a stacked division. Rafael dos Anjos, Tony Ferguson and Beniel Dariush would each be great clashes. Hooker can also be a great test for the future Arman Tsarukyan.

After all the problems he had getting to Las Vegas this fight, Hooker was one of the biggest winners of UFC 266. And he deserves an award for his performance in the form of another great. fight.

Fighters react to Valentina Shevchenko vs. Lauren Murphy at UFC 266

Here’s everything that happened at UFC 266 last night